“We started with Toyota when we opened a Canadian plant with one component and, as performance improved, we were rewarded, so now we have almost the entire cockpit. Relative to all lean companies we deal with, Toyota is the best.”
An automotive supplier

Toyota is more hands-on and more driven to improving their own systems and then showing how that improves you… Toyota will do things like level their production systems to make it easier on you. Toyota picks up our product 12 times per day. They helped move presses, moved where we get the water from, trained our employees. On the commercial side they are very hands-on also—they come in and measure and work to get cost out of the system. There is more opportunity to make profit at Toyota.

The principle: Find solid lean partners and grow together to mutual benefit in the long term

This is not to say that respect for the extended network of suppliers means being soft and an easy target. It´s in the Toyota way’s point of view to challenge their own people to improve and to do so with their suppliers as well. Supplier development involves a series of aggressive targets and demands to meet them. Suppliers like working for Toyota because they know they will improve and are treated with the same respect as the customers. But no Toyota supplier I know thinks it easy to satisfy the company. From Toyota’s perspective, raising the expectations for their suppliers and then treating them openly and teaching them is their definition of respect. To treat them fairly and then expel them or stop working with them without teaching them would be disrespectful. And simply changing suppliers because another supplier is a few percentage points cheaper (a common practice in automotive and many other sectors) would be unthinkable.

“Achievement of business performance by the parent company through bullying suppliers is totally alien to the spirit of the Toyota Production System.”

Working with providers for mutual learning of TPS -Lean

One area where Toyota has honed their TPS application skills has been working on projects with their suppliers. Toyota needs suppliers – just like they demand it at their own plants – to be able to produce and deliver high-quality components just-in-time. On the other hand, Toyota cannot reduce costs unless its suppliers do, but Toyota will not force them. It is not the Toyota Way to pressure suppliers. Since Toyota does not regard components as a commodity that can be sourced on the market through open tenders, it is critical that they collaborate with high-capacity suppliers that follow the TPS or an equivalent system. There are many methods used by Toyota to teach their suppliers and, in the style of the Toyota Way, they all are “learning by doing” processes, keeping theoretical training to a minimum. Real learning happens through real projects on the shop floor.

As I pondered the American Auto`s debacle with its suppliers, I wondered why the company wanted to take an elevator to the top floor without stopping on other floors below. Then I began to conceptualize the problem as a hierarchy pyramid.

Remembering social psychology, I considered Maslow’s need hierarchy, which assumes that people can work on the highest level of needs such as self-actualization (personal development) only if the lower levels´needs are satified. With that in mind I developed a version of the need hierarchy for a supplier: 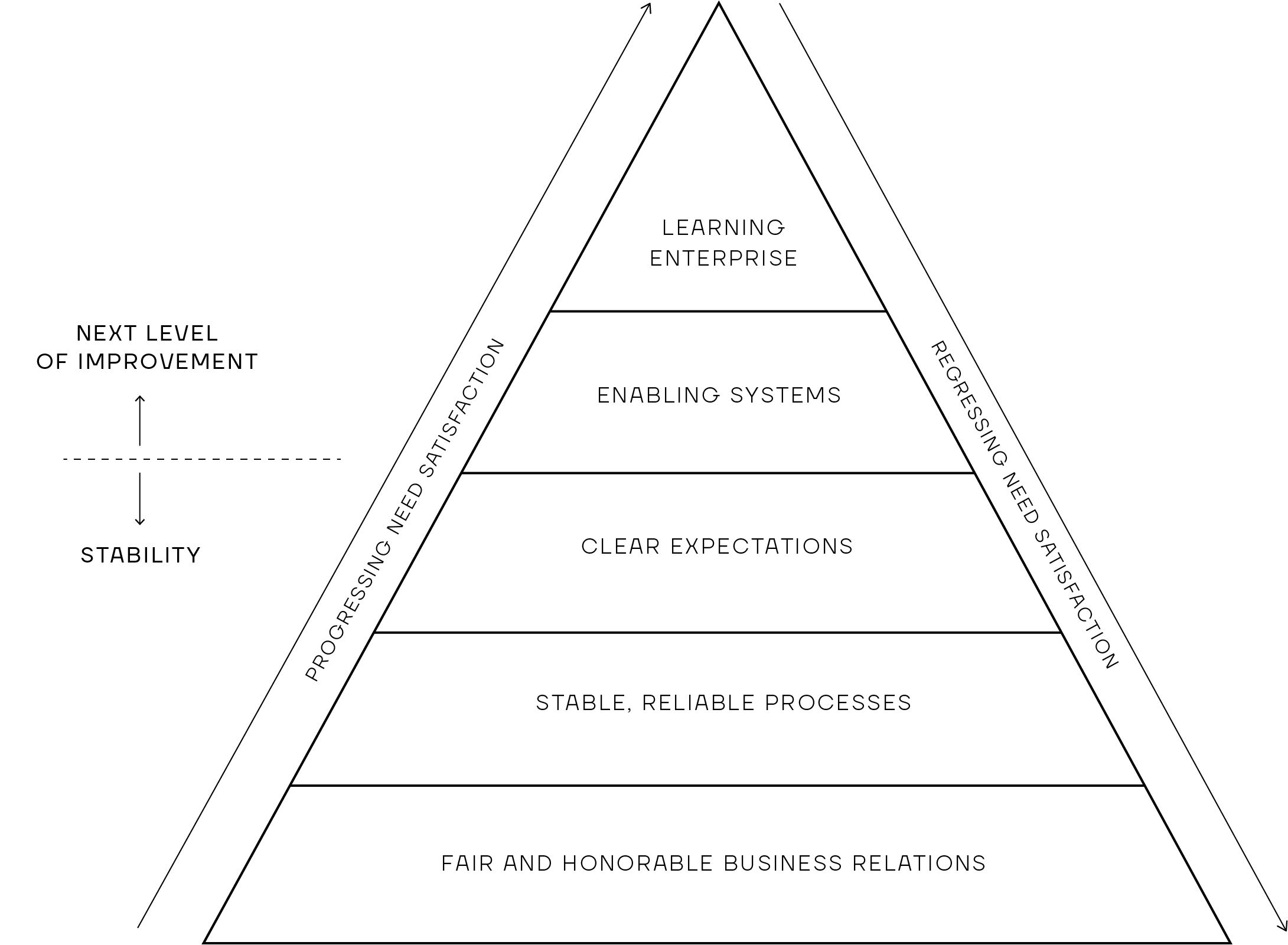 The hierarchy of needs in the supply chain in the graph above suggests that until relationships have stabilized to the point where the business relationship is fair, processes are stable and expectations are clear, it is impossible to reach the higher levels of enabling lean systems and truly learning together as an extended enterprise.

And it is often faster to go down than to go up. American Auto was making progress in the hierarchy between the early and mid-1990s and then collapsed abruptly in the late 1990s and into the 21st century.

Meanwhile Toyota has been moving steadily upwards. To start approaching Toyota, American Auto will need to rebuild their internal culture, become a learning organization, and disrupt strategies that provide contradictory policies to its suppliers.

BOOK RECOMMENDATION
The ActioGlobal team recommends you to read Jeff Liker’s bestseller, The Toyota Way. Following the reading, experimentation on the Gemba will provide the real learning.
CONTACT OUR EXPERTS

Have a video Call when it suits you best.

We give you the 14 keys to promote a lean culture in your organization.